While this column is not political in nature, it poses the question of how we might learn from brand conversations and initiatives internationally, in which social issues are being addressed.

At the time of writing, South Africa is still reeling from the xenophobic repercussions and national, regional and international responses. In fact, this article has been prepared while on ground in Lagos, Nigeria, and the sentiment toward South Africans is not great – there is a distinct lack of understanding as to why and how we can behave like this as a nation and how we could possibly even remotely justify our actions. 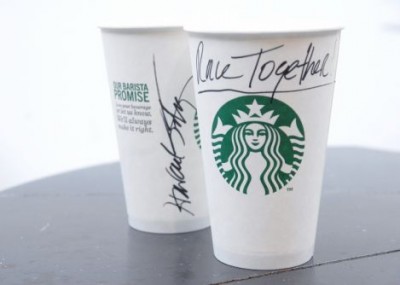 Let’s take a look at a a recent Starbucks initiative, for example [with parts of it since suspended, although the greater initiative continues — ed]. Amid much criticism and controversy, the CEO started a campaign to facilitate race relations, recognising that the US has current social sensitivities around the issue and the Starbucks workforce comprises some 40%+ from minority groups.

The campaign went out under the message of “race together” and had been intended to stimulate dialogue on a delicate subject between patrons within a store and between Starbucks staff and their customers.

Critics accused the leading coffee brand of commercial exploitation around a sensitive social subject and implied that it was a cheap shot. Those in favour suggested that it was a bold and courageous move that facilitates purpose and meaningful dialogue, placing the brand firmly at the heart of community issues and engaged in the territory from where it draws profits.

What makes the Starbucks approach particularly interesting was that it deployed its baristas as the facilitators of the intended dialogue — a risky strategy, given the sensitivity of the topic, but executed with the aid of appropriate training on the subject matter and with in-store support from specialist facilitators and councillors in the field.

This was a very innovative effort to make a meaningful difference in society, using people that have traditionally been tasked as key brand ambassadors and taking internal brand engagement to a different level.

There is also a tacit acknowledgement by Starbucks in the process that it does not have enough diversity in the senior ranks within its business and it was tackling the subject head on by facilitating the discussion and combining purpose with profit, aspiring to no longer confuse charitable handouts with being a commercially viable entity trying to improve the lives of others.

This trend is emerging throughout the world and the purpose economy is taking centre-stage, as we grapple with a lack of sufficient jobs and attendant social issues on a global scale. Organisations can no longer define themselves about money alone, and increasingly have to find a sense of purpose and an ability to make changes through great work environments – a business such as Google being a classic example of great innovation and superb business results, while building a highly differentiated culture and unique mission in the organisation.

Google has made a monumental social impact through the very nature of what it does and emerges this year, in parallel, as the leading Fortune 100 Company to Work For.

The Great Place to Work Institute in the US conducts global research probing the issue of what makes great work environments and identifies a number of factors that are emerging and driving three primary themes: trust, pride and camaraderie — oddly enough, three universal constructs that could similarly apply to the xenophobic challenge we as a country face right now.

These constructs are driven not just by millennials, but by a broader community of people looking to make better workplaces the world over; and a better perspective on what broader purpose organisations have, other than the pursuit of naked profits.

Business can no longer stand back and assume that these issues are for the exclusive domain of governments to resolve. Business and brands need to play a role, too, and become catalysts for progress, purpose and change — for the benefit of all society.

So, hats off to Starbucks for taking the bold step forward and initiating a conversation around a specific social dynamic. The campaign may not have been perfect and it had several flaws, but it did not allow perfection to be the enemy of progress and stepped boldly forward to create a dialogue for social change, knowingly blurring the line between purpose and profit; and engaging its entire network and customer base in the conversation.

Is this the new era for internal brand engagement – in which the brand becomes an inside-out conduit to engage multiple stakeholders of the business toward progressive change and a better society as a whole?

As the likes of Google, Starbucks, Walmart, Virgin and Whole Foods Market push toward a new mission-driven approach to business that engages their people internally and strengthens their licence to operate in society, what can we learn from this in a South African context?

Our mining industry, for example, has been under strain in this area nationally, and has had to drastically improve its approach to stakeholder communication and engagement.

It is time for a broader South Africa to step forward and ensure we engage socially at a pan-African level if we are to stamp out the scourge of xenophobia and ensure our continued licence to operate across the region.

So, let’s get our internal brand back on track in SA as a matter of urgency – why don’t we start with creating trust, restoring pride and building camaraderie?!